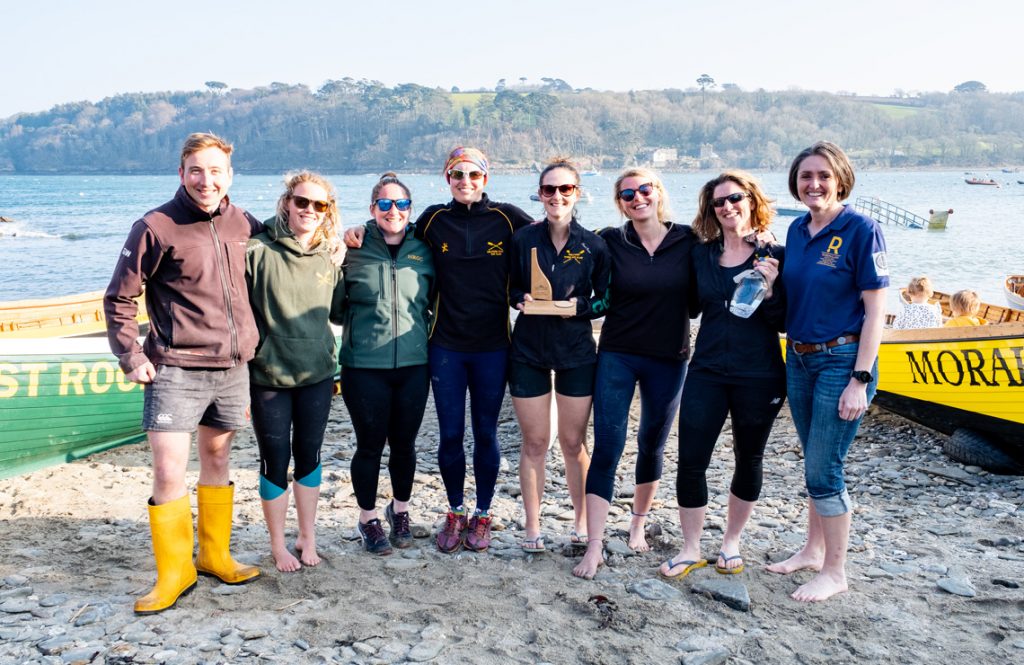 Rosemullion Distillery marked their new partnership with the Helford River Gig Club (HRGC) when they handed out prizes at the recent Mini-Scillies event. Both the champion gig rowers and the internationally lauded artisan distillers are keen to ensure that the competitive and highly social sport of gig-racing is widely available to locals.

“Helford River Gig Club was one of the few clubs to help revive the sport 30 years ago, and now with over 200 members it’s one of the biggest in the world. They train on the Helford River, one the most outstandingly beautiful watercourses in the South West. HRGC’s competitiveness and generosity of spirit, together with their love of the location and its people, matches our company ethos exactly. We’re natural partners.”

Competitive gig-rowing has grown out of Cornwall’s great maritime past and has been practiced by generations. Manned by six rowers, with a cox at the helm, gigs were built to cope with the diverse conditions of the often-treacherous coastlines around Cornwall and the Isles of Scilly, working mainly as lifeboats or pilots, steering trans-Atlantic ships and their passengers into safe harbour. To this day, wooden gigs must be built to 1838 specifications.

Ahead of this year’s World Pilot Gig Championships held in the Scillies, HRGC invited many of 2021’stop-performing crews to compete in their own ‘Mini-Scillies’ held on the Helford River. New sponsors Rosemullion Distillery were there to hand the Mini-Scillies winners a bottle of Rosemullion rum or gin.

“Gig rowing is a highly social sport,” says Steve Bagshaw, Chairman of HRGC. “What better way to celebrate our victories than with a tot of rum distilled on the same Helford shores as our club?”

Impressive results in the Mini-Scillies 2022 included the HRGC’s Men’s A coming in third overall, the HRGC’s Men’s Vets second and HRGC’s Ladies’ A taking first. These results bode well for HRGC’s winning chances at the World Pilot Gig Championships 2022.

“Unique aromatics on the nose with hints of brine and coastal botanicals.

The palate is soft and bright with a beautifully balanced flavour profile.

Herbs, spices, seaweed and lemon on the finish.

Continues to evolve into a memorable drink.”

This website uses cookies to improve your experience while you navigate through the website. Out of these, the cookies that are categorized as necessary are stored on your browser as they are essential for the working of basic functionalities of the website. We also use third-party cookies that help us analyze and understand how you use this website. These cookies will be stored in your browser only with your consent. You also have the option to opt-out of these cookies. But opting out of some of these cookies may affect your browsing experience.
Necessary Always Enabled
Necessary cookies are absolutely essential for the website to function properly. These cookies ensure basic functionalities and security features of the website, anonymously.
Functional
Functional cookies help to perform certain functionalities like sharing the content of the website on social media platforms, collect feedbacks, and other third-party features.
Performance
Performance cookies are used to understand and analyze the key performance indexes of the website which helps in delivering a better user experience for the visitors.
Analytics
Analytical cookies are used to understand how visitors interact with the website. These cookies help provide information on metrics the number of visitors, bounce rate, traffic source, etc.
Advertisement
Advertisement cookies are used to provide visitors with relevant ads and marketing campaigns. These cookies track visitors across websites and collect information to provide customized ads.
Others
Other uncategorized cookies are those that are being analyzed and have not been classified into a category as yet.
SAVE & ACCEPT
Powered by

[]
×
Sign up to our newsletter and receive a 5% discount code

We'll send your discount code to your email address